Coffee Anyone? How to order coffee in Portugal

31 Oct Coffee Anyone? How to order coffee in Portugal

What’s it really like to settle in Portugal? Can a tea-drinking Brit ever adjust to a coffee-drinking culture? A client recently told us that although they were researching the facts and figures they would still like a bit more depth and colour about the personal experience of moving to Portugal. We’ve read Kate’s blogs in the past and we’re delighted that she’s agreed to share more of her own tales here – we hope they help.

Here’s Kate’s story:  I’m a 70s girl, I was raised on Nesquik milk shakes, Ribena and Corona pop. We drank PG tips tea. Therefore my first taste of coffee was a Nescafé instant with cold silver top milk and two sugars. Despite the ever increasing popularity of big name coffee house chains I have to admit I have never evolved much further than that sweet milky instant coffee my mum used to make except for dropping down to one sugar…..for ‘health reasons’.

Therefore when my husband, Mr C, and I arrived in Portugal five years ago we were slightly dumbfounded and more than a little confused by what coffee to order.

The cafés in Portugal are nothing like Starbucks or Costa. There are no take outs, there are no polystyrene cups and your name is not written helpfully on the side in case you should happen to forget yours whilst drinking your purchase. And there are certainly no Double Decaff Americano Latte au Laits with foam, a flake and side sprinkles. Portugal cafés serve good simple coffee at a great price but getting the right one for you may take some trial and error and some sleepless caffeine fueled nights if you decide to go all out on a tasting spree.

We started by asking for a coffee with milk – café com leite. The variations we were given all had one thing in common, they came in a teeny tiny cup with a teeny tiny handle and were incredibly strong for our rather pathetic caffeine bereft palettes. Nevertheless, as ‘When in Rome’, was our then motto, we would dutifully try and hold the tiny cups daintily and sip at the bitter strong coffee and milk combo whilst discussing how you could possibly dunk a digestive.

As this would simply not do we asked a fellow British expat and discovered the Portuguese equivalent of a Nescafé was a Meia de Leite (may-uh duh late), literally meaning half milk, this 50/50 combo of milk and coffee came in a decent sized cup with a handle big enough to be able to put a finger or even two through.

However at the time we always asked for “Um café meia de leite” or “Dois cafés meias de leites” (we made up our plurals, adding an ‘ess’ here and there where deemed appropriate) and we could never understand why we always got extra tiny cups of strong black coffee, never the right number and invariably had to send them back and order another “Um cafe meia de leite” which resulted in yet another small black coffee along with what we actually wanted. This caused much confusion for both us and the poor cafe staff for several weeks until a kindly or possibly very frustrated waiter at a regular haunt told us we were asking for two types of coffee; um café and a meia de leite.

Ironically we then learnt that you could just simply ask for a Nescafé, which gives you an instant coffee with or without milk. But by the time we had learnt this we had grown accustomed to the stronger milkier version and never looked back to those instant days. 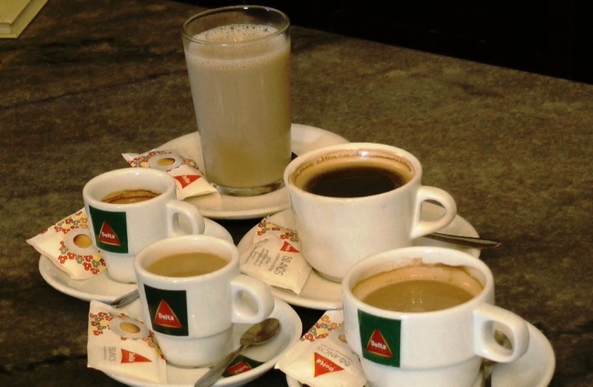 And so here you go, my brief intro into the names and types of coffee you will find here (if I have missed any out please do let me know, I admit to being more than a trifle confused by the range):

Um Café (uma bica in Lisbon, um cimbalinho in Porto) is a simple black espresso served in a teeny cup, if you would like the said cup full then simply ask for um cheio (chay-oh) and for a double espresso you ask for a um café duplo (dooploo).

Um Italiano is a really strong and really small shot of coffee, I suspect a spoon will stand up in it unaided whilst um cortado is half way between um café and um Italiano.

Um pingo/pingado is the same as um café but has a dash of milk whilst um garoto is an Italiano filled with milk, kind of 50/50. Are you still with me or are you reaching for the tea bags?

And then finally for the black coffees there is um abatanado, a large cup of black coffee, the equivalent of an Americano.

For those who prefer a milkier version there are really only two options. Which is nice:

And um galão (gal-owm), the latte of Portugal, a milky long coffee served usually in a glass with or without a handle, which if particularly hot can cause some inventive ways with a napkin to be able to pick up the said glass. The temperature of a galão varies from piping hot to tepid. If you particularly want it hot then ask for it ‘quente’ (kent) but be prepared for some napkin origami if your glass is without a handle.

Finally is is worth nothing the terms ‘escuro’ and ‘claro’ meaning dark and light, or in the case of coffee, strong or weak. I always ask for ‘um galão escuro’ now, as sometimes it can be nothing more than coffee tasting milk. Escuro guarantees a darker, stronger tasting drink.

It is also worth noting that if asking for two galão, you ask for ‘dois galões’ (doysh gal-oysh). This is where the rhyme ends though, do not, as a freshly arrived friend did, and ask for ‘tres galesh’.

And oh, of course, there is um descafeinado which is a decaff. But that is like asking for a vegan sausage and you will be laughed out of the cafe.

Hi, I’m Kate. Originally from the Midlands in the UK, I’ve lived in Portugal for five years now with my husband and a steady accumulation of adopted street dogs – currently we have four. We live near Pedrogao Grande on a small quinta where my husband spends his time renovating and building our home and I flit from writing to creating artisan glass beads and jewellery. I write from my own personal experience of living this new, rather chaotic, ever changing but never boring life that we have chosen and if my words can help you, inspire you or just make you laugh then I will be happy.

Sorry, the comment form is closed at this time.